Crinum Whole of Mine Contract Announcement!

Mastermyne is excited to announce we have reached a long term company goal – we are officially the contract mine operator for Sojitz’s Crinum Underground Mine for the next 7 years! Early works commenced July last year, and now our Crinum team can move full steam ahead into pre-development works, ready for production early 2022. Employing up to 180 permanent workforce at its peak – this contract is a real game changer for the business and takes us back to the Emerald region where some of first major contracts kicked off. Marking a major milestone in our history and one that had many Mastermyner hands on deck (past and present) to get this over the line. Well done to all involved. What a fantastic way to bring in new financial year! 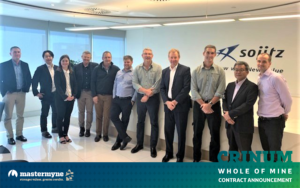